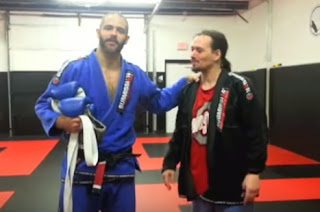 Finally I was caught in a prank at the school.

From time to time the white belts can get a little big headed. Occasionally I'll step up and deflate their egos. Tonight I was caught unsuspecting by two of my students.

The white belt is a long time friend of mine who has been training BJJ for about a year and a half.

The purple belt that stepped into the video later in the video is also a long time friend and a very good grappler.

When my hat comes up over my eyes I tried to play by the rules and keep my eyes closed. I honestly didnt know until the very end that I was not grappling the white belt.

Needless to say I was thinking some crazy stuff when he took my back. You would think that I would have noticed that it was not the white belt right away as the white belt was in a gi and the purple belt was in no gi but the fact that I was wearing boxing gloves on my hands and a hat pulled over my eyes, combined with the fact that I thought I was about to get choked in front of my whole class had my mind elsewhere.

It was all in good fun, next time I'll make sure I'm not wearing a blindfold.