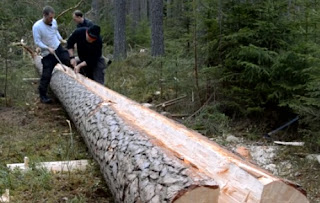 The movie describes an attempt to split a thirteen meter long log of pine tree. The riving was done by radial cuts. The original was founded in the spire of the church of Hardemo southwest of Örebro city in the province of Närke. The church was built approximately between 1180 – 1220. These rafts are produced from the log by a method which never been documented before. One side of the rafts is raw sapwood which is rare in churches from the Middle age. All woodworking are done with tools that are modelled on archaeological findings. The felling and riving of the tree are performed with a few axes and tools.