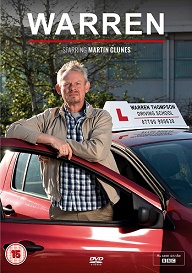 Warren, Series 1 is released on DVD on May 20th

Synopsis
TV favourite Martin Clunes returns to our screens as another man behaving badly: Warren, a hilariously pedantic driving instructor who thinks the world is against him, in prime-time sitcom currently airing on BBC One and coming to DVD and digital courtesy of Acorn Media International.

Created and written by upcoming British writing team Jimmy Donny Cosgrove and Paul McKenna (no, not that one), this original six-part comedy drama centres around Warren Thompson, who suddenly finds himself in his mid-50s, forced to up sticks from the south to Preston when his partner Anne’s (Lisa Millett – Robin Hood, Peterloo) father falls ill. Not blessed with patience, empathy, or any kind of paternal instinct whatsoever, cantankerous, blunt and grumpy, he just about tolerates his students, not to mention the two teenage stepsons he never wanted.

To put it delicately, Warren’s naturally difficult personality means he’s constantly finding himself in sticky situations. Set in his ways, he’s happy with a clean house, a neat garden, and a nice cup of tea…but always seems to end up on the verge of absolutely losing it. From neighbourly disputes to vendettas in both his personal and professional life, this uniquely British, crabby comedy hero will have you clutching your sides and clutching your pearls in equal measure.


Warren arrives on DVD and digital (to download and keep from iTunes, Amazon Prime Video and Google Play) so stick on your L plates and get ready for a bumpy ride.


For your chance to win just answer the question below.


Terms and conditions
1. Closing date 27-05-19
2. No alternative prize is available
3. When the competition ends as indicated on this page, any and all entries received after this point will not count and emails blacklisted due to not checking this page first.
4. Winners will be chosen randomly and will be informed via email.

Email ThisBlogThis!Share to TwitterShare to FacebookShare to Pinterest
Labels: Warren