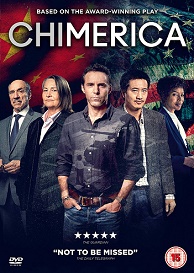 Chimerica is released on DVD on May 20th

Synopsis
EARNING PLAUDITS galore and described as an ‘electrifying thriller’ by The Guardian, Olivier award-winning playwright Lucy Kirkwood’s stage play Chimerica is set for the small screen treatment, as a powerful and timely four-part series. Airing on Channel 4 this Spring, this unique drama is set to arrive on DVD and digital from Acorn Media International.

Adapted by Kirkwood for TV, this fictional story about true events has been brought up to date using the notorious 2016 US Presidential election as a back drop. It explores the murky borders between fact and fiction, truth and censorship, political manipulation and personal sacrifice.

Award-winning actor Alessandro Nivola (American Hustle, Disobedience) stars as Lee Berger, the photographer behind the seminal Tank Man of Tiananmen Square photo, captured during the deadly 1989 protests in China. Now working as a dedicated photojournalist in America, accusations of fake news are levelled against him, and he sets out to reclaim his credibility by searching for the subject of his most famous picture.

Exploring not just the relationship between East and West, but also some of the most pressing and important issues affecting society today, the series delves deep into the new world of fake news, censorship and the power of political protest, with the rise of Trump and the suppression of Chinese human rights protests mirroring each other in unexpected and unsettling ways.


Terms and conditions
1. Closing date 27-05-19
2. No alternative prize is available
3. When the competition ends as indicated on this page, any and all entries received after this point will not count and emails blacklisted due to not checking this page first.
4. Winners will be chosen randomly and will be informed via email.

Email ThisBlogThis!Share to TwitterShare to FacebookShare to Pinterest
Labels: Chimerica