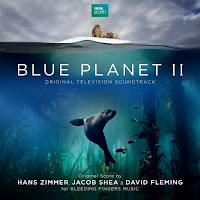 Blue Planet II Soundtrack is out on CD on December 1st and to celebrate we have a great competition for you and 3 copies on CD to give away.

A sequel to the 2001 series Blue Planet, it took 4 years to complete this seven part new exploration of the underwater worlds, with 125 expeditions across 39 countries and 6000 hours of underwater filming. The series will be broadcast on BBC One from 29 October 2017.

With over 120 soundtracks to his credit which have grossed 24 billion dollars at the box office, Hans Zimmer has been honoured with many accolades, an Academy Award, two Golden Globes, three Grammys, an American Music Award, a Tony Award and The Henry Mancini Award for Lifetime Achievement. His Academy Award nomination for Interstellar marked his 10th Oscar nomination.

You can buy this from Amazon UK using the following link that opens in a new window.
Blue Planet II Soundtrack Audio CD

To enter all you have to do is answer this easy question...

Send you name, address and of course the answer to competition@tviscool.com

Terms and conditions
1. Closing date 08-12-17
2. No alternative prize is available
3. When the competition ends as indicated on this page, any and all entries received after this point will not count and emails blacklisted due to not checking this page first.
4. Winners will be chosen randomly and will be informed via email.