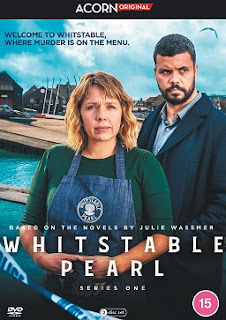 Whitstable Pearl Series 1 on DVD is released on November 14th
And to celebrate we have a great competition for you and 3 copies on DVD to give away.
Synopsis:
Head to the stunning Kent coast to discover a gem of a series, Whitstable Pearl, the Acorn TV Original crime-drama starring acting favourite Kerry Godliman (After Life, Save Me, Adult Material) alongside Frances Barber (Silk, Mr Holmes) and Howard Charles (The Musketeers, Liar, Shadow and Bone).
The series is set for its DVD and digital release thanks to Acorn Media International on 14 November 2022, and coincides with the brand-new second series coming to Acorn TV on 28 November 2022.
Set in the picturesque 16th century English seaside resort of Whitstable, one of Kent’s most stunning coastal towns famous for its native oysters, the enthralling mystery series, based on acclaimed author Julie Wassmer’s (EastEnders) popular novels The Whitstable Pearl Mystery and Disappearance at Oare is brought to life for the first time on screen by iconic Norwegian filmmaker Øystein Karlsen (Exit, Dag, Lilyhammer).
We meet big-hearted local celebrity Pearl Nolan (Godliman), who runs the eponymous Whitstable Pearl restaurant, but her real passion lies in detective work, after her police career was suddenly cut short many years before. When Pearl discovers the body of close family friend, Vinnie, she’s convinced it was foul play and following her instincts, she embarks on her own murder investigation.  Then a second body turns up and she finds herself embroiled in the dark underbelly of this picturesque town...
Teaming up with new arrival DCI Mike McGuire (Charles), Pearl is soon putting her distant police-training to good use and decides now is the time to set up her own detective agency. The world is her oyster.
Crimes most horrid have washed up on these shores, but discover this Pearl of wisdom who’s ready to solve them.
Order from Amazon at https://amzn.to/3Ug36jc
For your chance to win just answer the question below.

Whitstable Pearl is based on teh novels by which author?
Send your name, address and of course the answer to competition365@outlook.com
Quick Terms and conditions
1. Closing date 21-11-22
2. No alternative prize is available
3. When the competition ends as indicated on this page, any and all entries received after this point will not count and emails blacklisted due to not checking this page first.
4. Winners will be chosen randomly and will be informed via email.
5. Entries that come directly from other websites will not be accepted.
Posted by JD at 14:11