COMPETITION: Win The Secrets She Keeps Series 1 & 2 on DVD 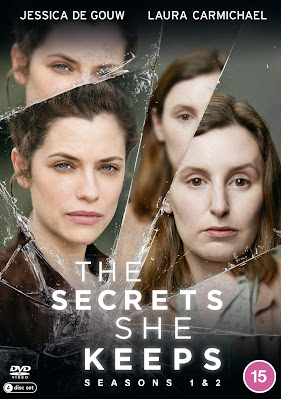 The Secrets She Keeps Series 1 & 2 is released on 24th October.
And to celebrate we have a great competition for you and 2 copies on DVD to give away.
Synopsis:
Electrifying psychological thriller, The Secrets She Keeps had fans rivetted, and now this gripping and devastatingly tense Australian drama returns with a stellar second series.
What if the life you wanted belonged to someone else? Based on the worldwide bestseller by Michael Robotham, The Secrets She Keeps introduced viewers to influencer Meghan Shaughnessy (Jessica De Gouw – The Crown, Pennyworth) and troubled Brit Agatha (Laura Carmichael – Downton Abbey, Marcella), two pregnant women whose lives collide in a Sydney grocery store. But Agatha is not who she claims to be, and following an unforgivable crime sparked by obsession, deceit, and longing – their two worlds begin to implode...
The second series picks up two years later with both Agatha and Meghan struggling to deal with the devastating fallout from the life-changing events. In a maximum-security prison, Agatha faces the consequences of abducting Ben Shaughnessy and awaits sentencing. In the meantime, Ben's traumatised mum, Meghan struggles to rebuild her family's life. Her anxiety only heightens when Lorelei, a young journalist with a mysterious agenda, becomes fixated on Meghan and Agatha – who happens to be keeping a new secret of her own...
All three women have dark and worrying secrets to hide, and their lives rapidly begin to move in shocking new directions... Series Two promises bone-chilling twists and astounding turns as the chilling and complex interplay between Meghan and Agatha escalates and explodes.
Uncover The Secrets She Keeps, a spellbinding tale of obsession that will have viewers on the edge of their seats.
Order from Amazon at https://amzn.to/3Vis2Yk
For your chance to win just answer the question below.

The Secrets She Keeps is based on the worldwide bestseller by who?
Send your name, address and of course the answer to competition365@outlook.com
Quick Terms and conditions
1. Closing date 31-10-22
2. No alternative prize is available
3. When the competition ends as indicated on this page, any and all entries received after this point will not count and emails blacklisted due to not checking this page first.
4. Winners will be chosen randomly and will be informed via email.
5. Entries that come directly from other websites will not be accepted.
Posted by JD at 00:30

Email ThisBlogThis!Share to TwitterShare to FacebookShare to Pinterest
Labels: The Secrets She Keeps