COMPETITION: Win My Life is Murder: Series 1 & 2 Boxset on DVD 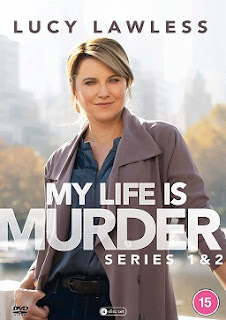 My Life is Murder: Series 1 & 2 Boxset is released on 10th October.
And to celebrate we have a great competition for you and a copy on DVD to give away.
Synopsis:
Award-winning actor and screen favourite Lucy Lawless returns for the second series one of Australia’s most popular crime dramas My Life is Murder. This entertaining crime drama premiered exclusively on Acorn TV, and following its TX on Alibi this August, My Life is Murder Series 2 is set to arrive on DVD, and digital, alongside My Life is Murder Complete Series 1 – 2 Box set on 10 October 2022, courtesy of Acorn Media International.
Renewed for a third season, it’s the perfect time to catch up with ex-cop turned detective Alexa Crowe (Lucy Lawless – Xena: Warrior Princess, Parks and Recreation). This series sees her return to her New Zealand hometown after years living in Australia where she’s called upon to investigate puzzling murders by series newcomer – charismatic DI Harry Henare (Rawiri Jobe – The Brokenwood Mysteries).
Alexa is once again joined in Auckland her partner-in-crime-solving, Madison Feliciano (Ebony Vagulans – To Be, The Heart Guy) who’s closer than ever to her mentor – quite literally, as she winds up living in Alexa’s apartment. But to truly make a fresh start, Alexa must deal with the family troubles she’s avoided for decades, starting with her wayward brother...
This series finds Lucy investigating the death of a drag queen, a museum curator's murder, the mysterious demise of an ambitious young winemaker and a very cold case of a chef found dead in his walk-in freezer. Can she endure a survival expert murder case and help in the death of a self-help guru?
Series 2 welcomes new faces, including cafe owner Reuben (Joe Naufahu, Game of Thrones), and sees Lucy Lawless reunite with Xena: Warrior Princess co-star Renée O’Connor along with other fabulous guest stars, including: William Shatner (Star Trek), Sara Wiseman (A Place to Call Home), Jay Ryan (It: Chapter Two), Michelle Ang (Fear the Walking Dead) and Bill Bailey (Black Books).
Settle down for a murder mystery adventure that promises sharp wit, charming characters, and plenty of drama with My Life is Murder Series 2.
Order from Amazon at https://amzn.to/3y6Ql1l
For your chance to win just answer the question below.

COMPETITION CLOSED
Quick Terms and conditions
1. Closing date 17-10-22
2. No alternative prize is available
3. When the competition ends as indicated on this page, any and all entries received after this point will not count and emails blacklisted due to not checking this page first.
4. Winners will be chosen randomly and will be informed via email.
5. Entries that come directly from other websites will not be accepted.
Posted by JD at 14:06

Email ThisBlogThis!Share to TwitterShare to FacebookShare to Pinterest
Labels: My Life is Murder