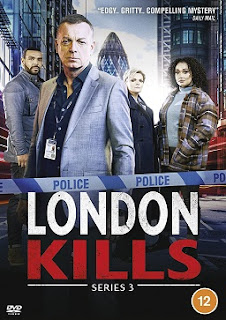 London Kills Series 3 on DVD is released on 24th October.
And to celebrate we have a great competition for you and 3 copies on DVD to give away.
Synopsis:
London’s elite murder squad is back for more London Kills as the hit crime drama returns for its gripping third series. Hot on the heels of its BBC transmission – beginning Monday, 17 October – Series Three is set to be released on DVD and digital on October 24, 2022, as London Kills Series 3 alongside London Kills Series 1 – 3 Complete Box set courtesy of Acorn Media International.
Following the success of the first two series, crime TV virtuoso Paul Marquess (The Bill, Crime Stories and Suspects) brings us the latest instalment of the hit show that has become a firm fan favourite.
London’s crack team of detectives – DI David Bradford (Hugo Spear – Marcella), DC Rob Brady (Bailey Patrick – Bodyguard), DS Vivienne Cole (Sharon Small – The Inspector Lynley Mysteries) and DC Billie Fitzgerald (Tori Allen-Martin – Unforgotten) – return to our screens to tackle the capital’s multitude of monstrous murders. Set against the backdrop of one of the most electrifying cities in the world, this slick and gritty show sees the savvy, special team face some of their toughest cases yet.
The new series delivers a host of deadly deeds, including the murder of a schoolboy found in a lake, a case that’s too close for comfort for DS Fitzgerald, when she discovers the body of a locksmith who gave evidence against her father’s killer and a dead man found in a suitcase.  And things take a devastating turn when DC Brady discovers the body of a young woman who was under police protection…
Then another victim turns up, a man found dead at the wheel of his van… As the murder team investigate the shocking crimes a pattern emerges - could they all be linked and are they closer to home than they dare to imagine?
Order from Amazon at https://amzn.to/3D3oNgs
For your chance to win just answer the question below.

Who plays DC Rob Brady in London Kills?
Send your name, address and of course the answer to competition365@outlook.com
Quick Terms and conditions
1. Closing date 31-10-22
2. No alternative prize is available
3. When the competition ends as indicated on this page, any and all entries received after this point will not count and emails blacklisted due to not checking this page first.
4. Winners will be chosen randomly and will be informed via email.
5. Entries that come directly from other websites will not be accepted.
Posted by JD at 10:38