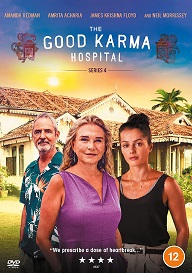 The Good Karma Hospital: Series 4  on DVD  - Released from 11th April
And to celebrate we have a great competition for you and 3 copies on DVD to give away.
Synopsis:
It’s time for a spoonful of sun-soaked TV medicine as we head back to The Good Karma Hospital and the stunning shores of Kerala, South India for a fourth series of the hit ITV drama.
The Good Karma Hospital Series 4 arrives on DVD courtesy of Acorn Media International, alongside The Good Karma Hospital Complete Series 1 – 4 DVD Box Set on 11th April 2022.
The Good Karma Hospital began with junior doctor Ruby Walker (Amrita Acharia – Game of Thrones) travelling to Southern India in search of work and a distraction from a major heartbreak. A position at the under-resourced and over-worked Good Karma Hospital quicky envelops her and kick-starts a brand-new chapter of her life...
Three seasons later and the tirelessly working team at this trusty and thriving tropical Indian hospital is as busy as ever. The fierce and passionate Dr Lydia Fonseca (Amanda Redman – New Tricks) must confront her complicated past and is forced to face some home truths in order to save her boyfriend Greg (Neil Morrissey – Line of Duty), from getting deported.
Ruby is still reeling following Gabriel’s (James Krishna Floyd – Of Kings and Prophets) shock departure. Struggling with an uncertain future, she makes some rash decisions – but must find an outlet for her rage before she loses control...
Series four sees the arrival of Frankie Martin (Raquel Cassidy – Downton Abbey) and her neurodiverse son Bobby (Connor Catchpole – Enola Holmes) who are visiting India, as well as two new docs – charismatic British Asian Dr Samir Hasan (Harki Bhambra – Call the Midwife) and Dr Nikita ‘Niki’ Sharma (Rebecca Ablack – Ginny & Georgia), a privileged and headstrong young doctor who is determined to get a taste of real life, working in a community hospital.
As with all families, this medical family has their ups and downs, yet they are bound by duty to their patients – and love for one another. No one shift is the same, and in the face of chance encounters, new-found political enemies, deadly viruses and complex relationships – this family has a lot on their hands...
We prescribe an escape to the sunny shores of South India for The Good Karma Hospital – where you’ll receive a dose of warmth, charm, community spirit and plenty of drama.
Pre-Order from Amazon at https://amzn.to/3JZ4vpa
For your chance to win just answer the question below.

COMPETITION CLOSED
Terms and conditions
1. Closing date 18-04-22
2. No alternative prize is available
3. When the competition ends as indicated on this page, any and all entries received after this point will not count and emails blacklisted due to not checking this page first.
4. Winners will be chosen randomly and will be informed via email.
5. Entries that come directly from other websites will not be accepted.
Posted by JD at 13:46

Email ThisBlogThis!Share to TwitterShare to FacebookShare to Pinterest
Labels: The Good Karma Hospital