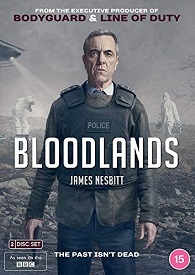 Bloodlands is released on DVD and Blu-ray on 22nd of March
And to celebrate we have a great competition for you and 3 copies on DVD to give away.
Synopsis:
A critically acclaimed and compelling new BBC One crime drama, Bloodlands, created by new writer Chris Brandon and from executive producer Jed Mercurio, creator of Bodyguard and Line of Duty, is coming to Blu-ray, DVD & Digital.
When a car is pulled from the sea, veteran Northern Ireland police detective Tom Brannick (James Nesbitt; The Missing, Cold Feet) instantly sees the connection to an infamous cold case that holds enormous personal significance for him, a notorious and long-buried series of mysterious disappearances.
Bloodlands follows Tom Brannick’s obsessive campaign to identify and unmask the legendary assassin behind these events – a figure code-named Goliath, after the giant shipyard cranes Samson and Goliath that dominate the Belfast skyline. What follows is a dogged hunt and an explosive cat-and-mouse game where the stakes have never been higher.
Dazzler Media presents Bloodlands on Blu-ray, DVD & Digital from 22nd March
Buy From Amazon at
https://amzn.to/3qJZoih
For your chance to win just answer the question below.

COMPETITION CLOSED
Terms and conditions
1. Closing date 29-03-21
2. No alternative prize is available
3. When the competition ends as indicated on this page, any and all entries received after this point will not count and emails blacklisted due to not checking this page first.
4. Winners will be chosen randomly and will be informed via email.
5. Entries that come directly from other websites will not be accepted.

Email ThisBlogThis!Share to TwitterShare to FacebookShare to Pinterest
Labels: Bloodlands