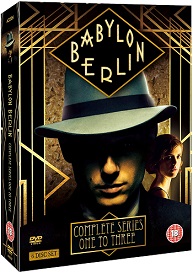 The lavish, 40 million dollar series is Germany’s most expensive drama to date, and explores a metropolis in turmoil: poverty stands in stark contrast to the excessive indulgence of the night life in a city on the brink.

Series three begins in the Autumn of 1929, during the tumultuous weeks before Black Friday’s stock market crash, and 10 months after the turbulent events of the second series. Inspector Gereon Rath (Volker Bruch) and Charlotte Ritter (Liv Lisa Fries) are assigned to investigate the violent death of a silent film actress. As talkies start conquering the big screen and Berlin becomes a hub of modern cinema, the pair soon realise the film industry is as rotten as the criminal underworld they are all too familiar with.

In the meantime, political extremists regather their forces and democracy itself is under more threat than ever. As the rise of national socialism confronts growing communist factions, time is ticking inexorably towards the inevitability of war once more…

Terms and conditions
1. Closing date 20-04-20
2. No alternative prize is available
3. When the competition ends as indicated on this page, any and all entries received after this point will not count and emails blacklisted due to not checking this page first.
4. Winners will be chosen randomly and will be informed via email.
Posted by JD at 09:32