Manufacturing plywood boards: then and now 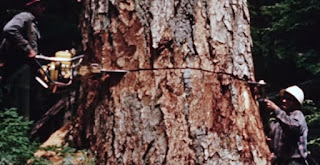 Plywood is a simple material made by glueing together thin sheets of wood, known as veneers or plies. These basic elements have remained broadly the same throughout its history. The most significant breakthrough in its production came in the early 1800s with the development of steam-powered machines that could cut veneers cheaply. The most influential of these was the rotary veneer cutter.

The cutter rotates a log against a wide, horizontal blade, causing it to ‘peel’ into a continuous sheet of wood. This enables the creation of longer, wider sheets of veneer than previously possible and with little waste. Using these machines meant that plywood could be manufactured quickly and inexpensively on a large scale.

This film shows the stages in manufacturing plywood boards in the mid-20th century and today. The process remains essentially unchanged, although today many of the machines are much faster and computer controlled.