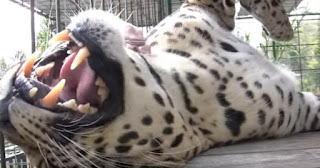 Voodoo is a rescue animal, an African spotted leopard that came to Cedar Cove at 5 months old.

Voodoo was purchased at three months of age by a private couple from a breeder with the intention of making him a house pet and playmate to two full grown rottweiler dogs.

He was declawed on all paws but still overpowered his purchasers and was too rough and aggressive to keep, at which point he was brought to William Pottorff at Cedar Cove.

He resides here still, and at 13 years old in 2013, he's treated to regular bouts of affection while plans are underway for his, and other, new habitats, so stay tuned!

Come see Voodoo and all our other fascinating friends at Cedar Cove!
http://www.saveoursiberians.org