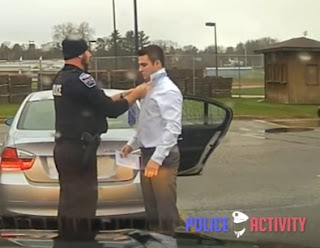 A University of Wisconsin-Stout student pulled over for speeding last month near campus was rushing to give a presentation and didn’t know how to tie his necktie. According to the Menomonie Police Department, Officer Martin Folczyk spotted the student’s BMW speeding down 8th Street at 8:55 a.m. on the morning of Nov. 30 and initiated the stop. “I have to get a tie tied,” the driver said. “I have a presentation and I thought my buddy was home but he’s not, and I’m running behind.”

Before asking for his license and insurance, the officer asked the student for his tie, then loosely tied it around his own neck before handing it back. “While I do this, why don’t you grab your proof of insurance and your driver’s license real quick,” Officer Folczyk said. “Probably not the best knot, but it will work.” “Better than what I was going to do,” the student said. “Thank you so much.” The student was given a verbal warning.

*After seeing the video of the traffic stop, the police chief invited the driver back to the police station and taught him to properly tie his own tie.