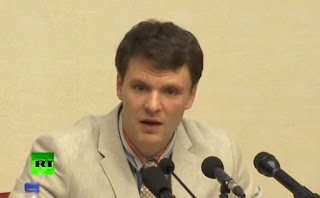 A US student arrested in North Korea for a “hostile act” has tearfully apologized for stealing a political banner “as a trophy,” saying that a church supported by the American government made him do it.

Otto Warmbier, a 21-year-old student of at the University of Virginia, appeared in a government-arranged news conference in Pyongyang, begging for forgiveness for what he said was “the worst mistake in his life.”