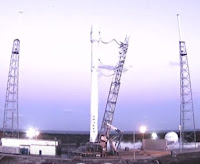 After four launch delays over nine days, SpaceX finally boosted a 5.3-ton communications satellite into orbit Friday, blasting off from Cape Canaveral on a high-energy trajectory that will help the new relay station enter service about 45 days earlier than originally expected.

Under a crystal clear sunset sky, the 229-foot-tall rocket's nine Merlin 1D first-stage engines flashed to life just after sunset, at 6:35 p.m. (GMT-5), throttled up to 1.5 million pounds of thrust and pushed the Falcon 9 away from launch complex 40 at the Cape Canaveral Air Force Station.

Launch tries Feb. 24 and 25 were called off because of problems super cooling the rocket's liquid oxygen propellant, a key feature in the upgraded booster's design. A third launch try Sunday was scrubbed after a boat wandered into the off-shore danger zone, triggering a delay. SpaceX attempted to launch later in the window but but a low-thrust warning triggered a dramatic engine shutdown on the pad. A fourth launch attempt Tuesday was scrubbed because of high winds aloft.

This time around, there were no propellant problems, the weather cooperated and the countdown hit zero right on time. Initially climbing straight up, the Falcon 9 quickly arced over and shot away to the east, putting on a spectacular show as the vehicle rose into the glare of the westering sun.

Email ThisBlogThis!Share to TwitterShare to FacebookShare to Pinterest
Labels: SpaceX