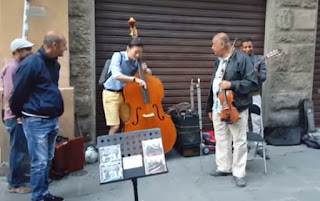 "We were traveling in Florence, Italy.
He joined street players after saying I'm a bassist and if I could play some.

In Korea, he played it with four strings but there were only three, which might make him play little bit hard but amazing.

The song they played, Autumn leaves, is jazz standard, which is the reason why they could play together right away."