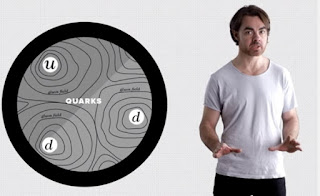 What is the Higgs field and why is it a fundamental part of our universe?

Quantum Field Theory is generally accepted as an accurate description of the subatomic universe. However until recently this theory had one giant hole in it. The particles it describes had no mass! The Higgs field and the Higgs mechanism were proposed long ago in order to give particles mass, but it was only in 2012 that the existence of the field was proved with the discovery of the Higgs boson by the Large Hadron Collider. In this episode of Space Time, we tell you exactly how the Higgs field can "give" something mass, which opens the door to a deeper understanding of what mass really is.

Email ThisBlogThis!Share to TwitterShare to FacebookShare to Pinterest
Labels: Higgs