Fat driver struggling to get out of his low-slung BMW!!! 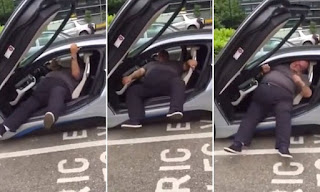 This bizarre footage shows an obese man struggling to get out of his new car.
The stout fellow huffs and puffs for the best part of a minute before finally emerging from the low-slung, gull wing-doored vehicle.

He is filmed by his pals trying to escape ill-judged choice of BMW.

They can be heard laughing hysterically in the background while shouting advice at the tubby motorist.

Email ThisBlogThis!Share to TwitterShare to FacebookShare to Pinterest
Labels: BMW