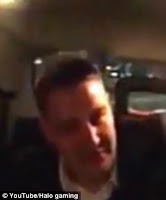 A spokesman for the Metropolitan Police said: 'The victim, a licensed black cab driver, had picked up a man in Camberwell New Road at approximately 1.15am.

'A short while later the man started to shout at the driver; the driver eventually stopped the cab in King's Road, Chelsea, at around 1.30am and asked the man to pay his fare and leave.

'The man refused and shouted further abuse, some of a racial nature. He then climbed out of the window of the cab, spat and kicked the vehicle before making off.'

Anyone with information is asked to contact Kensington and Chelsea police via 101 or call Crimestoppers anonymously on 0800 555 111.