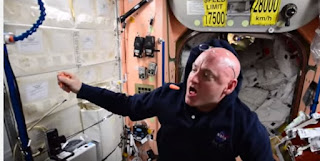 On October 16, 2015, NASA astronaut Scott Kelly became the new record holder for most time in space by an American astronaut. He broke fellow astronaut Mike Fincke’s mark of 382 days, and will extend that record well beyond 500 days by the end of his yearlong mission.

Kelly and Russian cosmonaut Mikhail Kornienko are spending a year aboard the International Space Station, testing the limits of human research, space exploration and the human spirit.

Learn more about their historic mission at www.nasa.gov/oneyear