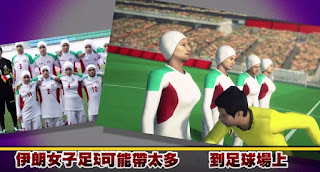 TEHRAN / IRAN — Iran's national female soccer team has been accused of using players who are not "fully" women. According to Saudi-owned news outlet Al Arabiya, as many as eight of their players have yet to undergo a sex change operation, yet they are playing as females.

The allegations stem from Mojtabi Sharifi, who told the Iranian-based Young Journalists Club, "Players have been playing with Iran's female team without completing sex change operations." Sharifi was described as "an official close to the Iranian league."

Believe it or not, sex change operations are legal in Iran. Pretty surprising for a culture which values segregation of sexes and punishes homosexuality with death.

By the way, this wouldn't the first time Iran's been busted for tucking-back an eggplant or two on the soccer field. The Telegraph reported this same problem in 2014 when four men were found to be playing on Iran's female soccer team.

So if Iran can't play by the international rules and regulations on the soccer field, can we trust them to uphold other international standards and agreements? Where not calling their bluff could lead to apocalyptic consequences.


Daily videos brought to you by THE Taiwanese Animators behind the infamous Tiger Woods animation. We got the funniest animations on the web to help you stay in-the-know on all the trending stories, so sit back, relax, and watch a few.
Posted by JD at 10:05