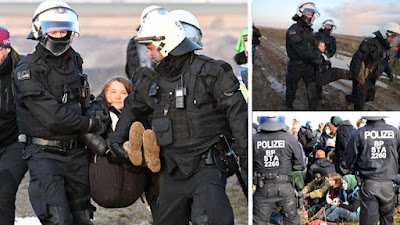 I am sure you saw it plastered all over the mainstream media. Greta Thunberg was arrested, carried away by police, in scenes that shocked the world. The photos above were used by every single newspaper.The suggestion being that during a protest Greta had to be dragged away, she resisted arrest, she is a climate activist hero!

Well as the video below shows, the reality was quite a bit different. It looks very much like the whole thing was a set up. This video was leaked on the internet and it shows that the whole thing was not only a set up, it was done purely as something of a photoshoot, and all coincidentally to time with the World Economic Forum meeting.

Have you ever known the police to stop and pose with someone they have supposed to have arrested?

Believe nothing. Trust no one.

The fake arrest of #GretaThunberg

All set up for the cameras. pic.twitter.com/IViYGTXnG9