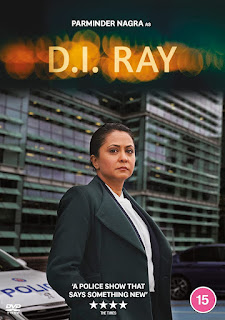 DI Ray - Released from 11th July
And to celebrate we have a great competition for you and 3 copies on DVD to give away.
Synopsis:
‘Thrilling, fresh relevant, thought-provoking’ (Daily Mirror), it stars the talented and acclaimed Parminder Nagra (Bend It Like Beckham) in a powerful and poignant performance. Written and created by Line of Duty star, and one-to-watch scribe Maya Sondhi (EastEnders) with Jed Mercurio as Exec Producer, this ground-breaking and engrossing series is a refreshing and necessary addition to the crime-drama genre promising twists, turns and fresh-perspectives aplenty...
When DI Rachita Ray, a British Asian policewoman new to homicide is assigned to investigate the suspected honour killing of a young Muslim man, she quickly realises the suspects can’t be guilty.
The evidence against the two brothers from a British Hindu family is flimsy at best but her attempts at conveying this to her superiors and her colleagues fall on deaf ears. Hidden biases and a keenness to wrap the case up mean no one is listening to her until her probing leads the team to a much more sinister crime.
As she uncovers a complex web of deceit within organised crime, she also lays bare the wounds deep within herself that she’s spent a lifetime ignoring - wounds that are born from a desperate desire to ‘fit in’, despite not looking the part.
Pre-Order from Amazon at https://amzn.to/3AoORS3
For your chance to win just answer the question below.

COMPETITION CLOSED
Terms and conditions
1. Closing date 18-07-22
2. No alternative prize is available
3. When the competition ends as indicated on this page, any and all entries received after this point will not count and emails blacklisted due to not checking this page first.
4. Winners will be chosen randomly and will be informed via email.
5. Entries that come directly from other websites will not be accepted.
Posted by JD at 10:48