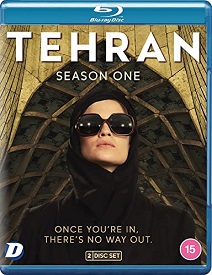 Tehran Season 1 on DVD and Blu-ray  - Released from 15th November
And to celebrate we have a great competition for you and a copy on Blu-ray to give away.
Synopsis:
The complete first season of the tense, thrilling and critically acclaimed Tehran from Apple TV+ finally comes to Blu-ray & DVD.
A Jordanian airliner makes an emergency landing in Tehran. Among the passengers is Tamar Rabinyan, a Mossad hacker-agent who infiltrates Tehran under an assumed identity. Her historic mission: to enable Israeli warplanes to bomb a nuclear reactor and prevent Iran from having an atomic bomb.
But her mission fails and Tamar is trapped. Fleeing a Revolutionary Guards commander who has uncovered her identity, Tamar hides among the young opponents of the Iranian regime and, against her will, falls in love with one of them. While experiencing Tehran's stormy underground life, Tamar plans a new operation to enable the bombing, which will place her and everyone dear to her in jeopardy.
Dazzler Media presents Tehran: Season One on Blu-ray & DVD from 15th November
Pre-Order from Amazon at https://amzn.to/3qk6PAi
For your chance to win just answer the question below.

Tehran is a city in which country?
Send your name, address and of course the answer to competition365@outlook.com
Terms and conditions
1. Closing date 22-11-21
2. No alternative prize is available
3. When the competition ends as indicated on this page, any and all entries received after this point will not count and emails blacklisted due to not checking this page first.
4. Winners will be chosen randomly and will be informed via email.
5. Entries that come directly from other websites will not be accepted.
Posted by JD at 14:50