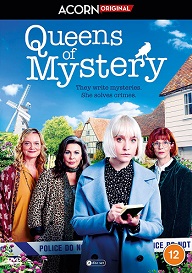 Queens of Mystery Series 1  on DVD  - Released from 29th November
And to celebrate we have a great competition for you and 3 copies on DVD to give away.
Synopsis:
Roll out the red carpet for the Emmy Award-nominated TV hit QUEENS OF MYSTERY, which makes its royal premiere on UK DVD this November, courtesy of Acorn Media International.
The bold and thrilling Acorn TV Original drama stars British acting favourites Julie Graham (The Bletchley Circle, Shetland, Penance), Siobhan Redmond (Unforgotten, The Replacement, Taggart) and Sarah Woodward (The Pale Horse,Quiz, The Politician’s Husband) as the eponymous queens, alongside Olivia Vinall (The Woman in White, Apple Tree Yard, Maigret) as their niece, Matilda Stone an ambitious Detective Sergeant who must solve crimes in the seemingly genteel region of Wildemarsh.
Created by Julian Unthank (Doc Martin, New Tricks), this wickedly offbeat contemporary murder mystery series, combines bold visuals, quirky characters and fast-paced dialogue with darkly comic murders that will keep audiences guessing.
We follow the entertaining adventures of Beth, Cat and Jane Stone, three crime-writing sisters, who give their 28-year-old detective niece a helping hand whether she wants it or not, as she tackles curious crimes for the Marsh Valley Police.
They use their extensive knowledge of crime – both real and fictional – solving a slew of whodunit murders in their picturesque postcode.  But no matter how many cases they crack, the unsolved mystery that haunts them most, is the disappearance of Matilda’s mother. Between investigating murders from the curious to the bizarre and writing their own renowned novels, the three aunts also attempt to help their perennially single niece find love.
The series features a stellar British cast including Andrew Leung (Doctor Who) as the dashing Dr. Daniel Lynch and Rebecca Grant (Doctors, Holby City) as his girlfriend Natasha; Michael Elcock is Police Constable Terry Foster and Martin Trenaman (The Inbetweeners) is the dry and put-upon Inspector Derek Thorne.
A fantastic line-up of guest stars includes Selina Cadell (Doc Martin), Omid Djalili (Dickensian, The Mummy), Chu Omambala (Liar), and Michelle Collins (Eastenders, Coronation Street) alongside: Frances Barber (Silk, Father Brown), Josette Simon (Broadchurch, Casualty) and Con O’Neill (Happy Valley, The Tunnel).
Make way for the Queens of Mystery as the fabulous first series arrives on 29 November 2021 and coincides with the series two premiere on streaming service Acorn TV.
Pre-Order from Amazon at https://amzn.to/3r08yLA
For your chance to win just answer the question below.

What are the names of the three crime-writing sisters in Queens of Mystery?
Send your name, address and of course the answer to competition365@outlook.com
Terms and conditions
1. Closing date 13-12-21
2. No alternative prize is available
3. When the competition ends as indicated on this page, any and all entries received after this point will not count and emails blacklisted due to not checking this page first.
4. Winners will be chosen randomly and will be informed via email.
5. Entries that come directly from other websites will not be accepted.
Posted by JD at 12:53

Email ThisBlogThis!Share to TwitterShare to FacebookShare to Pinterest
Labels: Queens of Mystery