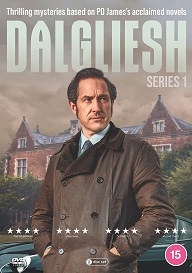 Dalgliesh: Series 1  on DVD  - Released from 6th December
And to celebrate we have a great competition for you and 3 copies on DVD to give away.
Synopsis:
Bertie Carvel takes the titular lead in Dalgliesh, a brand-new, must-watch period crime drama which is set to delight on its DVD and digital release this December courtesy of Acorn Media International, following its UK premiere on Channel 5.
Based on renowned author P.D. James’ bestselling novels Adam Dalgliesh Mysteries, this gripping new drama follows the enigmatic detective and poet (Carvel – Doctor Foster, Jonathan Strange & Mr Norrell, The Tragedy of Macbeth), as he takes on extraordinary murder cases, and reveals long-buried secrets. The six-part series arrives on DVD and digital on 13 December 2021.
Following in the footsteps of distinguished detectives such as Sherlock Holmes and Poirot, Adam Dalgliesh takes us to 1970s England, solving strange mysteries including: a student nurse poisoned during training, a homeless man and a retired Tory politician found dead with their throats slashed in a London church and a very suspicious death at a mysterious disability care home. Dedicating his career to cracking crime and bringing killers to justice, Dalgliesh is forced to uncover some dark and dangerous truths along the way...
Written by Helen Edmundson (Mary Magdalene) alongside a host of talented scribes, the show features a brilliant line-up of guests including Jeremy Irvine (War Horse), Natasha Little (War of the Worlds) and Mirren Mack (Sex Education). The series draws upon three books, tracing the detective’s expansive crime-fighting career, with each case offering its own unique setting and an exciting guest cast.
Get sleuthing with your new favourite detective drama Dalgliesh.
Pre-Order from Amazon at https://amzn.to/3D1Fqpl
For your chance to win just answer the question below.

COMPETITION CLOSED
Terms and conditions
1. Closing date 13-12-21
2. No alternative prize is available
3. When the competition ends as indicated on this page, any and all entries received after this point will not count and emails blacklisted due to not checking this page first.
4. Winners will be chosen randomly and will be informed via email.
5. Entries that come directly from other websites will not be accepted.
Posted by JD at 14:49

Email ThisBlogThis!Share to TwitterShare to FacebookShare to Pinterest
Labels: Dalgliesh