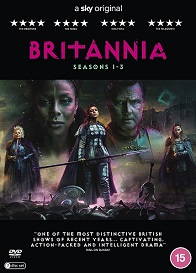 Britannia Series 1-3 on DVD  - Released from 15th November
And to celebrate we have a great competition for you and 2 copies to give away.
Synopsis:
Throat-slashing, drugged-up-druids and plenty of romping ­– Britannia returns to rule TV with its third series from Olivier award-winning playwright Jez Butterworth and continues to merge fantasy and fact in his hallucinogenic historical series.
The capricious Celts and ruthless Romans are back for Britannia Series III airing now on Sky and coming to DVD from Acorn Media International on 15 November 2021, alongside the Series I – III Box Set.
The fightback against the Roman Empire, which stands at its mightiest, is on the horizon. Aulus (David Morrissey – The Missing)  is joined by his wife Hemple (Sophie Okonedo – His Dark Materials) who arrives to oversee his conquest of the Britons, bringing with her mysterious and dark forces. Cait (Eleanor Worthington-Cox –Gwen) continues her journey to becoming the prophesied “chosen one” and Mackenzie Crook’s 10,000-year-old Druid leader Veran is set to head down into the underworld for a glimpse of the future. As competing factions feud, whose prophecy will be fulfilled, and who edges closer to ruling Britannia?
Bring on the battle Britannia style, there will be blood… lots of it.
Pre-Order from Amazon at https://amzn.to/3qfNq3q
For your chance to win just answer the question below.

Who plays Hemple in Britannia?
Send your name, address and of course the answer to competition365@outlook.com
Terms and conditions
1. Closing date 22-11-21
2. No alternative prize is available
3. When the competition ends as indicated on this page, any and all entries received after this point will not count and emails blacklisted due to not checking this page first.
4. Winners will be chosen randomly and will be informed via email.
5. Entries that come directly from other websites will not be accepted.
Posted by JD at 11:20

Email ThisBlogThis!Share to TwitterShare to FacebookShare to Pinterest
Labels: Britannia