COMPETITION: Win The Walking Dead: World Beyond Season 1 on DVD 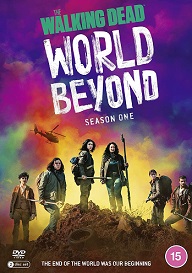 The Walking Dead: World Beyond Season 1 - Released on DVD from 11th October
And to celebrate we have a great competition for you and 2 DVDs to give away.
Synopsis:
Cultural phenomenon The Walking Dead expands its scope with a next-generation spin-off World Beyond, a new series exploring the lives of four teenagers raised in a post-apocalyptic world. The Walking Dead: World Beyond arrives on Blu-ray, DVD and digital 11 October 2021, courtesy of Acorn Media International.
Set in Nebraska, 10 years after the zombie apocalypse, smart high school student Iris Bennett (Aliyah Royale – The Red Line, War Paint), and her rebellious adopted sister Hope (Alexa Mansour – Unfriended: Dark Wed, Loco Love), are forced to set off on a dangerous journey, along with two friends, the intellectual Elton Ortiz (Nicolas Cantu – The Good Place, The Powerpuff Girls) and a shy transfer student with a mysterious, violent past, Silas Plaskett (Hal Cumpston – Bilched, Nine Perfect Strangers).
Leaving the safety and comfort of home to brave dangers, known and unknown, living and undead on an important quest, the teens are pursued by both those who wish to protect them and those who wish to harm them including Elizabeth Kublek (Julia Ormond – The Curious Case of Benjamin Button, My Week with Marilyn). A coming-of-age story unfurls across dangerous terrain, challenging everything they know about the world, themselves and each other. Some will become heroes. Some will become villains. But will they find the truths they seek in the World Beyond?
Pre-order from https://amzn.to/3A5CiaO
For your chance to win just answer the question below.

COMPETITION CLOSED
Terms and conditions
1. Closing date 18-10-21
2. No alternative prize is available
3. When the competition ends as indicated on this page, any and all entries received after this point will not count and emails blacklisted due to not checking this page first.
4. Winners will be chosen randomly and will be informed via email.
5. Entries that come directly from other websites will not be accepted.

Email ThisBlogThis!Share to TwitterShare to FacebookShare to Pinterest
Labels: The Walking Dead: World Beyond