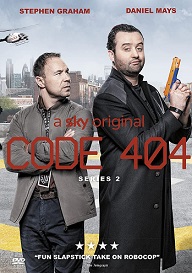 Code 404 Series 2 - Released on DVD from 11th October
And to celebrate we have a great competition for you and 2 DVDs to give away.
Synopsis:
Two British acting greats and Line of Duty alumni Stephen Graham and Daniel Mays, the ultimate acting dream team,  return for a second hilarious series of Code 404, that sees them taking a detour from serious drama to  tackle the buddy cop genre… like never seen before.  This side-splitting sci-fi, cop-show mash-up takes things to a whole new dimension.
Following its run on Sky Comedy, starting tonight Code 404 Series Two arrives on digital alongside the Series One and Two Box set on 11 October 2021, from Acorn Media International.
Picking up where series one left off, series two brings Detective Inspectors Roy Carver (Graham – Line of Duty, The Irishman) and DI John Major (Mays – Temple, Good Omens) back together for more comedy capers, criminal-catching, and a 20-year-old cold-case which throws the pair straight into action. The AI-driven Major struggles with the pressures of an impending divorce from his wife (Anna Maxwell-Martin – Motherland, Line of Duty), the return of his long-lost father, and strange glitches. Much to DI Carver’s concern, Major’s problems seem more serious than something a quick reboot can solve, and are likely signs of his AI failing. It looks like the dynamic duo are in for even more trouble than before…
The new series features brand new characters alongside the raucous returning cast, British comedian Meera Syal (Broadchurch, The Kumars) is Elizabeth Churchland, and Clive Russell (Game of Thrones, Ripper Street) stars as John’s father Clifford Major.
In the first series we meet DI Carver and DI Major, the top crime fighting duo in the Met's Special Investigation Unit. When an undercover sting goes horribly wrong, Major is gunned down on the job and killed. How will the SIU function without him? Well, it doesn't have to.
As an 'asset' considered too valuable to lose, his body is fast-tracked into an experimental Artificial Intelligence project to bring him back from the dead. The only problem is, Major 2.0 may look like and sound like the original, but something has been lost in translation – his crimefighting instincts have completely deserted him. Somehow, Major's error-strewn hunches and Carver's scrambling to make good allow them to just about scrape by. Not to mention in the year since his death, Major’s wife has moved on, and her new boyfriend causes Major some major problems...
Get ready for your upgrade with Code 404, a rollicking Robocop romp.
Pre-Order from https://amzn.to/3A4F3cf
For your chance to win just answer the question below.

COMPETITION CLOSED
Terms and conditions
1. Closing date 18-10-21
2. No alternative prize is available
3. When the competition ends as indicated on this page, any and all entries received after this point will not count and emails blacklisted due to not checking this page first.
4. Winners will be chosen randomly and will be informed via email.
5. Entries that come directly from other websites will not be accepted.

Email ThisBlogThis!Share to TwitterShare to FacebookShare to Pinterest
Labels: Code 404