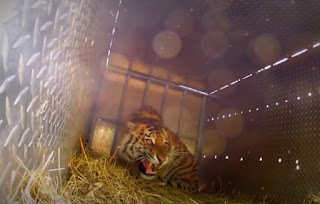 As it stands, the world wide population of Tigers in the wild is dwindling, even more so, the Siberian Tigers total no more than 400.

Watch as these 4 tigers are released into the Siberian wilderness. There is a certain majesty that each tiger possesses. Their snarl can be blood curling, their movements are purposeful and they are the true kings of the jungle.

The first 3 tigers released were motherless cubs that were recaptured from poachers. Their vitals were checked, then they were tagged and released.

The last tiger released was a full grown female tigress who, as she was released, was anointed Queen of the Forest.