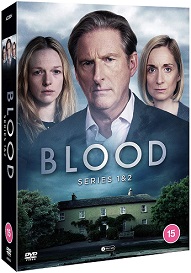 Synopsis
Line of Duty star Adrian Dunbar returns following the huge success of Blood for a second gripping series of the hit Irish drama. This psychological thriller from award-winning writer Sophie Petzal (The Last Kingdom, Riviera) arrives on DVD and digital after its run on Channel 5 as Blood Series Two and the Series One and Two Box Set on 11 May 2020 from Acorn Media International.

After the life-changing events of the first series, when Jim Hogan (Dunbar – Broken, Line of Duty) is placed under suspicion for the death of his wife (Ingrid Craigie – Striking Out, The Dead) by his younger daughter Cat (Carolina Main – Unforgotten, Temple), the Hogan family are still a long way from finding peace. Series Two sees Jim return after a year away to find his dutiful older daughter Fiona (Gráinne Keenan – Black Mirror, The Foreigner) is slowly succumbing to the same Motor Neuron Disease that afflicted her mother.

When Fiona is involved in a catastrophic car crash, the family gather again at the bedside of a loved one, but a shocking revelation means the newly promoted Detective Dez Breen (Seán Duggan – Normal People, Clean Break) must delve into the tangled past of this troubled family once more in pursuit of the elusive truth.

Could Fiona’s husband Paul (Ian Lloyd Anderson – Love/Hate, Herself) be caught up in a criminal enterprise, or is the past simply repeating itself? Either way, there is a dead body to contend with, and someone has Blood on their hands.

This enthralling whodunnit will keep you guessing: is Blood really thicker than water?

Terms and conditions
1. Closing date 18-05-20
2. No alternative prize is available
3. When the competition ends as indicated on this page, any and all entries received after this point will not count and emails blacklisted due to not checking this page first.
4. Winners will be chosen randomly and will be informed via email.
Posted by JD at 13:53

Email ThisBlogThis!Share to TwitterShare to FacebookShare to Pinterest
Labels: Blood