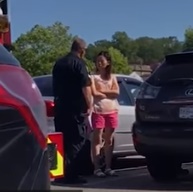 A video shows a Canadian police officer yelling at a mother for leaving her two children in a hot car while she went grocery shopping. Police in Vancouver received multiple calls about the children who were said to be in distress. A full emergency response including police and fire services were dispatched.The children, aged 3 and 6, were reportedly in the car for 20 minutes. The Ministry of Children and Family Development was informed about the case.