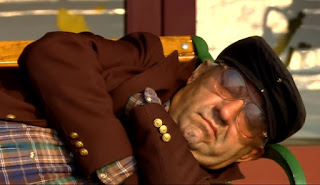 In 2002 D-Theater launched in the US - the dealers needed a demo tape of HD footage. JVC reused some HD video that had been shot as a demo for the Japanese HD market back in 1993.

This footage would have most likely been originally used for a HiVision MUSE demo (an HD Broadcast, Tape &  Laserdisc format).

You can determine that the year is 1993 by the adverts in Times Square - The Radio 501 CD that's advertised on a billboard came out in 1993 and Paper Moon is playing at the Marquis Theater.

For those wondering what HD video camera tech existed in 1993 -  there are a few options, but it's likely that this footage was shot with a HDVS camera- perhaps a Sony SONY HDC-500 attached to a HDV-10 portable recorder which recorded on UniHi 3/4" tape.