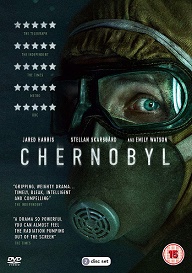 Chernobyl is out on DVD & Blu-ray on July 15th.

The result of extensive research, Chernobyl seeks to tell the stories of those directly involved in causing the catastrophe, and those affected by the nuclear fallout felt across the world. Jared Harris (Mad Men, The Crown) stars as Valery Legasov, a nuclear physicist who is one of the first people to grasp the scope of the nuclear disaster. Ulana Khomyuk (Emily Watson – Apple Tree Yard, The Theory of Everything) is a scientist committed to getting to the bottom of the cause, while Lyudmilla Ignatenko (Jessie Buckley – Wild Rose, Beast) is the wife of a firefighter who was first on the scene. Stellan Skarsgård (Mamma Mia, Thor) plays Soviet Deputy Prime Minister Boris Shchergina, leading the government commission from a safe distance.

Directed by The Walking Dead’s Jonas Renck, the series is committed to a realism that refuses to shy away from the horrors, both physical and psychological, inflicted upon the victims of this uniquely horrifying event. A deeply moving story about how individuals act when faced with something inexplicable, this drama seeks to honour the spirit of those who helped stop the devastation from spreading even further.

Investigating the lengths to which governments will go to cover up atrocities and suppress the spread of information, Chernobyl also acts as a timely warning: the truth will out.

Terms and conditions
1. Closing date 22-07-19
2. No alternative prize is available
3. When the competition ends as indicated on this page, any and all entries received after this point will not count and emails blacklisted due to not checking this page first.
4. Winners will be chosen randomly and will be informed via email.
Posted by JD at 09:58

Email ThisBlogThis!Share to TwitterShare to FacebookShare to Pinterest
Labels: Chernobyl