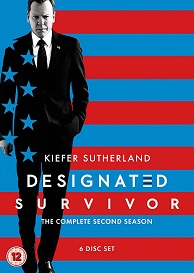 Designated Survivor -The Complete Second Season is out on DVD on 1st October 2018.

And to celebrate we have a great competition for you and 2 copies to give away.

Synopsis
The inimitable Kiefer Sutherland returns as the all-powerful, accidental Commander-in-Chief, Tom Kirkman, for the enthralling Second Season of the award-winning hit series Designated Survivor, from renowned US network ABC.

Following on from the thrilling first season – where lower-level cabinet minister and ‘Designated Survivor’ Tom Kirkman (Sutherland – 24), is suddenly appointed President of the United States, when a devastating attack on the US Capitol wipes out most of the government – we join the new leader one year into his presidency.

With the support of his devoted wife First Lady Alex Kirkman (Natascha McElhone – Californication), President Kirkman is starting to find his feet  as the most powerful man in the world. The terrorists who took down the Capitol are still at large and the President will stop at nothing to bring justice to the people they killed, even if it means making personal sacrifices.


Send you name, address and of course the answer to competition@tviscool.com

Terms and conditions
1. Closing date 08-10-18
2. No alternative prize is available
3. When the competition ends as indicated on this page, any and all entries received after this point will not count and emails blacklisted due to not checking this page first.
4. Winners will be chosen randomly and will be informed via email.
Posted by JD at 14:13