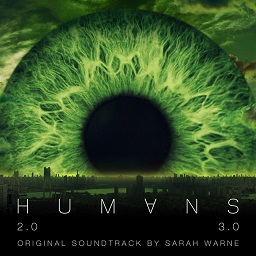 Humans Series 2 & 3 Original TV Soundtrack is out on Audio CD on 6th July 2018. And to celebrate we have a great competition for you and 3 copies on CD to give away.

Synopsis
Series 1 of Humans proposed the question, "What makes us human? Can a synthetic creation ever think and feel the way we do? And if so, what do we do about it?" It became Channel 4's most watched drama in 23 years.

Series 2 & 3 develops the ambitious drama further, underlining its appeal alongside nominations for BAFTA, RTS and NTA awards. Sarah Warne has leapt to prominence as one of the UK's most exciting young composers for television.

She has also scored the BAFTA nominated Channel 4 True Crime series Catching A Killer, the feature documentary She's French and hard-hitting BBC documentary Girls On The Edge. Other credits include series 2 of Red Productions' thriller for ITV, Prey, starring Sean Bean and BBC documentaries, Treasures of Ancient Greece and Kate Adie's Woman of World War One.


Click here to buy from Amazon (Opens in a new window)


Terms and conditions
1. Closing date 16-07-18
2. No alternative prize is available
3. When the competition ends as indicated on this page, any and all entries received after this point will not count and emails blacklisted due to not checking this page first.
4. Winners will be chosen randomly and will be informed via email.
Posted by JD at 10:23

Email ThisBlogThis!Share to TwitterShare to FacebookShare to Pinterest
Labels: Humans