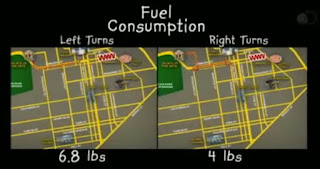 While an individual person may not save much by only making right turns, a huge corporation like UPS has proven since 2004 how avoiding left turns in its trucks can significantly increase its bottomline while reducing emissions and accidents.

With nearly 100,000 trucks and hundreds of aircraft, UPS averages 15.8 million packages delivered daily worldwide. While an individual person may not save much by only making right turns, since UPS implemented a right turn policy in 2004, they have significantly increased profits while reducing emissions and accidents.

UPS estimates the right-turn-heavy policy, combined with its routing software, shortens routes by 20.4 million miles and saves 10 million gallons of gas while delivering an additional 350,000 packages and reducing CO2 emissions by about 20,000 metric tons each year.

UPS engineers noticed how waiting to turn left caused trucks to fall behind on their schedules, consume more gas, and increase the probability of accidents. Their software maps routes with only right-hand turns unless it's quicker or easier to proceed with a left-hand turn. A driver estimates they do about 90% right-hand turns.

The television show Mythbusters tested the policy with one route using 8 left and 4 right turns, and another route using 1 left and 23 right turns. The UPS-like route was just over 1 mile and 9 minutes longer, but it reduced gas consumption from 6.8 to 4 pounds. UPS' software probably would've added one or two more left-hand turns to be more efficient on time while still saving gas.