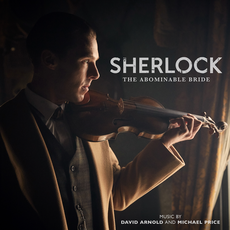 Sherlock - The Abominable Bride is out on Audio CD on 31st March and to celebrate we have a great competition for you and 3 copies of the CD to give away.

Synopsis:
Broadcast on BBC TV on January 1st 2016, The Abominable Bride saw the Sherlock series return to its original Victorian roots in a highly acclaimed special.

Watched by over 11m viewers in the UK, a cinema release with bonus footage was simulcasted in over 100 cinemas. The impact of the series across the world was underlined by major box office receipts around the globe especially in China and South Korea.

"The combination of the two of us works and I don't know what Sherlock would sound like if it was just David, or just me. Certainly we're capable of doing it but there's something to that creative mixing of our two voices which maybe really takes a cue from the show. There are two voices - John and Sherlock. It's not just Sherlock being super smart or just John dutifully solving crimes. They are a pair and that's why it works, and further I think a little creative chaos can be a good thing". - Michael Price

Check out the release on Amazon by clicking the link below: (Opens in a new window)
Sherlock - The Abominable Bride


To enter Email us on competition@tviscool.com with your answer, along with your name and address.


Terms and conditions
1. Closing date 10-04-17
2. No alternative prize is available
3. When the competition ends as indicated on this page, any and all entries received after this point will not count and emails blacklisted due to not checking this page first.
4. Winners will be chosen randomly and will be informed via email.

Email ThisBlogThis!Share to TwitterShare to FacebookShare to Pinterest
Labels: Sherlock The Abominable Bride