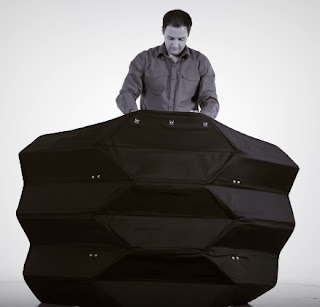 BYU mechanical engineers have created an origami-inspired, lightweight bulletproof shield that can protect law enforcement from gunfire. The new ballistic barrier can be folded compactly when not in use, making it easier to transport and deploy. When expanded — which takes only five seconds — it can provide cover for officers and stop bullets from several types of handguns.

“We worked with a federal special agent to understand what their needs were, as well as SWAT teams, police officers and law enforcement, and found that the current solutions are often too heavy and not as portable as they would like,” said Larry Howell, professor of mechanical engineering at BYU. “We wanted to create something that was compact, portable, lightweight and worked really well to protect them.”

In working with law enforcement, BYU researchers learned much of what is currently used hasn’t evolved much from medieval times: shields that are mostly flat, awkward plates that cover only one person. Current barriers are so heavy and cumbersome they make it difficult for officers to move into position.

The barrier Howell and his colleagues designed is made of 12 layers of bulletproof Kevlar and weighs only 55 pounds (many of the steel-based barriers in current use approach 100 pounds). The BYU-built barrier uses a Yoshimura origami crease pattern to expand around an officer, providing protection on the side in addition to protecting them in the front.

In testing, the barrier successfully stopped bullets from 9 mm, .357 Magnum and .44 Magnum pistols.

“Those are significant handguns with power,” Howell said. “We suspected that something as large as a .44 Magnum would actually tip it over, but that didn’t happen. The barrier is very stable, even with large bullets hitting it.”

The researchers constructed the barrier prototypes to be extremely stiff and protective throughout, while also maintaining the flexible qualities of Kevlar fabric so they can be folded compactly. Since Kevlar fabric is subject to fraying, abrasion and is sensitive to sunlight and water, the team also made a concentrated effort to reinforce it against the environment.

“It goes from a very compact state that you can carry around in the trunk of a car to something you can take with you, open up and take cover behind to be safe from bullets,” said Terri Bateman, BYU adjunct professor of engineering and research team member. “Then you can easily fold it up and move it if you need to advance your position.”

In addition to protecting police officers, researchers believe the barrier could be used to protect children in a school or a wounded person in an emergency situation. Although the ballistic barrier is now just in prototype form and not currently in use by any law enforcement agencies, Howell and Bateman have tested it with officers on site. The response has been positive so far.

Email ThisBlogThis!Share to TwitterShare to FacebookShare to Pinterest
Labels: Kevlar