Astronauts Strolling on the Moon and Singing (Apollo 17) 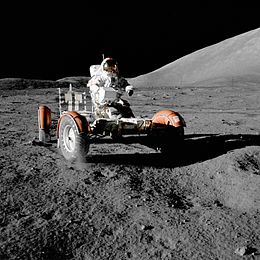 Apollo 17 was the final mission of NASA's Apollo program, the enterprise that landed the first humans on the Moon. Launched at 12:33 a.m. Eastern Standard Time (EST) on December 7, 1972, with a crew made up of Commander Eugene Cernan, Command Module Pilot Ronald Evans, and Lunar Module Pilot Harrison Schmitt, it was the last use of Apollo hardware for its original purpose; after Apollo 17, extra Apollo spacecraft were used in the Skylab and Apollo–Soyuz programs.