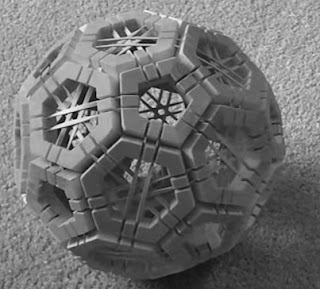 If you want to build this: I cut two chunks of 2x4 that were each 20" long. These were then ripped into 14 strips, which were eventually cut in half. Of these 28 total pieces, 18 were used for hexagonal and 10 were used for pentagonal tubes. This provided me with enough of the 1/2" thick parts to make two complete puzzles.

I usually call the trick featured in this video "the bucket trick." It will work to find the miter angle for any non-tapered bucket- it tells you what to set your saw at. This trick will work no matter how many sides the bucket has. It is especially useful for multi-sided trim-work, and to avoid making costly mistakes. If you don't remember what to set your saw at when finishing an octagonal window frame, just divide the whole way around (360) by the number of sides (8 in this case), and then split that into two... and the miter cut is 22.5°.
Think about it in the case of a picture frame: 360/4= 90; 90/2= 45.

The formula at the end may be further simplified to 180/n (when n=number of sides), but I have decided instead to present it the less reduced way as means of a mnemonic device. It is simple to remember that a bucket is a circle, and a regular convex polygon also closes around itself in much the same manner, so both are in a state of 360° completion to their continuous circuit. Further, it is not difficult to remember to cut the result in half, as a means of mental distribution over both pieces of the miter. This entire metaphor is flawed, and it is only a conceptual interpretation that works pragmatically; it is by no means representative of any sort of mathematical truth or revelation- in fact, quite the opposite. I just try to find ways to remember things, and I hope that this can help you as well.

As for the geodesic dome construction toy, I think I will let you interpret that for yourselves. It was a pleasure to build, and it is quite satisfying to assemble. To the puzzle purists: Please don't scream "this isn't a true puzzle!" until you have actually assembled it before. Besides, the term "puzzle" has a wide range of application if you think about it enough. All of life is a puzzle; we are immersed in an endless series of events, each of which require constant decision making on our part. Such a condition is the quintessential enigma- a continuous puzzle. Processing done... bye!