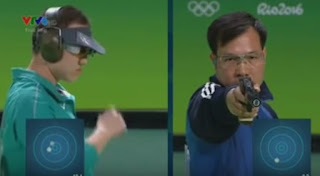 Vinh, 41, fell into the arms of his coaches after his near-perfect final shot in the men's 10m air pistol.

Jin had his head in his hands walking off after failing to replicate his heroics at London 2012.

He also won 50m pistol gold four years ago and will be hoping to turn around his form when he defends that title later in the competition.

The first of the eight finalists to be knocked out was the Nepalese-born Indian Jitu Rai.

Russia's representative Vladimir Gontcharov was next for the chop, followed by Italy's Giuseppe Giordano, Jin, and Juray Tuzinsky.

That left the stage clear for the three-cornered climax. Pang's exit setting up a tense face off between the two military men.

Wu had his partisan fans leaping out of their seats when he hit the front, but Vinh fired his 20th and final shot true and straight to nail it in the style of a worthy successor to Jin.

Email ThisBlogThis!Share to TwitterShare to FacebookShare to Pinterest
Labels: Vietnam