The bridge that is rebuilt every year by hand 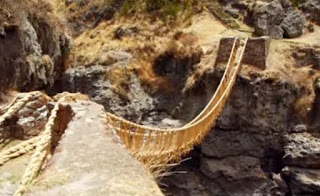 Produced for the exhibition "The Great Inka Road: Engineering an Empire" (http://americanindian.si.edu/inkaroad/), on view at the National Museum of the American Indian in Washington, D.C., through June 1, 2018. Every year, local communities on either side of the Apurimac River Canyon use traditional Inka engineering techniques to rebuild the Q'eswachaka Bridge. The old bridge is taken down and the new bridge is built in only three days. The bridge has been rebuilt in this same location continually since the time of the Inka. This video is narrated by John Ochsendorf, professor of civil engineering, Massachusetts Institute of Technology, and produced by Noonday Films.

Email ThisBlogThis!Share to TwitterShare to FacebookShare to Pinterest
Labels: Bridge