Jamie Foxx Speaks Out After Rescuing A Man From A Burning Car! 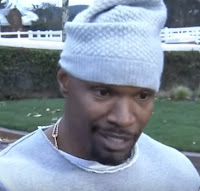 Actor Jamie Foxx is speaking out after rescuing a man from a burning truck right in front of his house. 32-year-old Brett Kyle of Newbury Park, was speeding westbound on Potrero Road when he crashed his 2007 Toyota Tacoma right in front of Foxx's home. The car struck a drainage pipe and concrete, causing it to roll over multiple times, authorities said. The vehicle ended up on its passenger side and caught fire, trapping Kyle inside. Foxx said he heard the crash, called 911 and then he rushed down to the scene. The truck was already on its side and on fire. The door was locked, and the window was up. With help from another man, Foxx pulled Kyle out of the burning wreckage. The two broke the car window using EMT scissors, cut the seat belt and pulled Kyle out to safety. Kyle's brother, Joe Kyle, told ABC News that Brett Kyle broke his collarbone, which in turn punctured his lung, but "he would be in a much worse situation if Jamie Foxx didn't come along." Brett Kyle was arrested for driving under the influence of alcohol. Posted By Persist