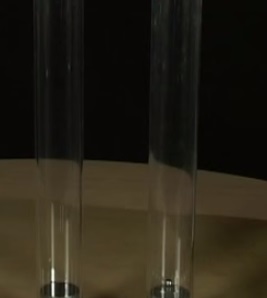 This amazing toy gives us an insight into the behaviour of metals at an atomic level!


There are two perspex tubes, and each has a circular lump of metal at the bottom. They appear pretty much identical. If you drop a ball bearing into the first tube, it falls onto the piece of stainless steel at the bottom, and it bounces a few times before stopping. The kinetic energy that it had originally has been dissipated. Some of it has been converted into sound - we hear the ball bearing hitting the metal. However there are other ways in which the kinetic energy is dissipated.

Most metals, including stainless steel, have a crystalline structure. This means that the atoms in the structure arrange themselves in an ordered manner, in which a small repeat unit called a 'unit cell' can be identified. This unit cell, which in some cases contains just several atoms, is repeated in all three directions, and in this way, the entire structure is built up. This unit cell description of a crystalline structure implies the atoms are arranged in perfect order, which is only true in an ideal solid. All crystalline solid structures contain missing atoms, called defects, impurity atoms of other elements, and misaligned planes of atoms called dislocations, or 'slip planes'. Because this helps the atoms to slide past one another, this is an important way in which energy is absorbed.

Now, drop a ball bearing into the other tube, and watch what happens. The ball bearing bounces back almost to the point at which is was dropped, and it continues to bounce for a considerable length of time. How is this happening?

On top of the lump of stainless steel is a disc of a metal alloy, called 'amorphous metal'. This alloy, which was discovered in 1993, consists of 5 metals - Zirconium, Beryllium, Titanium, Copper, and Nickel. The atoms in an amorphous material are not arranged in any ordered structure, rather they have a tightly-packed, but random arrangement. Amorphous materials are formed by cooling the liquid material quickly enough to prevent crystallization; the atoms do not have time to arrange themselves into an ordered structure. Liquidmetal® is an amorphous alloy (also known as a metallic glass) containing five elements, with the elemental composition is 41.2% zirconium, 22.5% beryllium, 13.8% titanium, 12.5% copper, and 10.0% nickel.

Because of the varying sizes of these atoms, and their random arrangement in the solid, there are no groups of atoms that can easily move past one another. Because there are no planes of atoms in an amorphous material, the atoms are gridlocked into the glassy structure, making the movement of groups of atoms very difficult. One consequence of this atomic gridlock is that some amorphous metals are very hard. Liquidmetal® is more than two times harder than stainless steel. However, besides being a very hard material, this amorphous alloy has a low elastic (or Young's) modulus. The combination of hardness and elasticity of amorphous metals gives them their unusual properties.