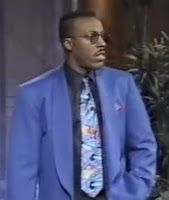 A group of protesters confront Arsenio during a taping of his show. He stands his ground, flabbergasted at the notion he would not feature a gay guest. Aired sometime in 1993/1994, I believe.

Arsenio Hall spoke about this incident back in 2013
"That legendary battle. That’s one interesting thing of coming back. I went through a lot of things, and now I get to do it in a different climate. When I analyze the Queer Nation battle now, I think about why it bothered me so much. It’s because I knew who I was. I knew a lot of my friends didn’t come to my defense when everyone was in the closet. I can give you 20 guests on my show in a month [who were gay], but they weren’t talking about it. Luther Vandross ain’t talking about it. He can’t at that time. Louie Anderson can’t then. Ellen can’t then. Rosie can’t then. They couldn’t even say, “Leave [Arsenio] alone!” Only that writer in New York, Harvey Fierstein [repeats Fierstein’s name in an incredible impersonation], was sitting on my couch and talking about issues. I had to let the world be what it is and catch up to the moment, but I knew what I was doing."
Posted by JD at 14:34