Driver cutting clamp off his car with angle grinder in Limerick 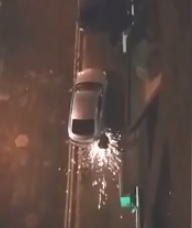 This video was shot in Limerick earlier this month, when local Chris Luszczki heard the man taking the grinder to the hated clamp in the hopes of getting rid of it.

Not long after getting his equipment out, the driver succeeded in freeing himself, driving off and leaving the clamp behind.

In the four days since it was uploaded, the video has already been watched more than 38,000 times and shared widely on Facebook and Twitter.

Unsurprisingly, the comment section was not very kind to the driver.

"He deserved to be clamped, up in the pavement and on a double yellow," one user wrote.