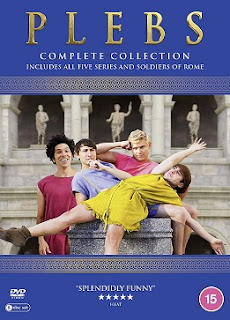 Plebs Complete Series 1-5 DVD Boxset inc Finale Special on DVD is released on December 12th
And to celebrate we have a great competition for you and a copy on DVD to give away.
Synopsis:
When in Rome, de de de… do as the Romans do! Here come the Romans for the final march of the hilarious comedy Plebs, which makes its highly anticipated return on ITV with the feature length special, Plebs: Soldiers Of Rome, before coming to digital on 9 December and to DVD on 12 December alongside the Plebs Complete Collection DVD Box Set which includes all five series and the special, courtesy of Acorn Media International.
Plebs follows the lives of three hapless young men from the suburbs as they try to get laid, hold down jobs and climb the social ladder in the big city... of Rome in 23BC. Penned by Sam Leifer (How Not to Live Your Life) and Tom Basden (After Life) and starring Tom Rosenthal (Friday Night Dinner), Ryan Sampson (Brassic) and Jonathan Pointing (London Kills) alongside a stellar cast and inspired guest stars, including a host of TV favourites: Amanda Holden, Danny Dyer, Maureen Lipman, Simon Callow, Shaun Williamson, Lauren Socha, Tim Key, James Fleet, Michelle Keegan, Miriam Margolyes, Ellie Taylor and David Bamber.
In Plebs: Soldiers Of Rome Marcus, Grumio, Jason and Aurelius join the army in peacetime in the hope of gaining respect, to succeed in their ongoing search for romance, and more importantly, get discounts at participating restaurants. But when war is declared, they’re sent into battle on the front line, and to add insult to injury, they’re about to fight for a cause they don’t believe in. Now their only option is to struggle for survival…
Will our hapless heroes make it out alive as they leave their humdrum lives in Rome to battle as soldiers for the cause?
Join the raucous Romans in their last hurrah as Plebs: Soldiers Of Rome takes us on a wickedly hilarious ride. The finale to the much-loved comedy along with the complete bumper box set is guaranteed to entertain with belly laughs a plenty this winter.
Order from Amazon at https://amzn.to/3Hbkt1d
For your chance to win just answer the question below.

COMPETITION CLOSED
Quick Terms and conditions
1. Closing date 19-12-22
2. No alternative prize is available
3. When the competition ends as indicated on this page, any and all entries received after this point will not count and emails blacklisted due to not checking this page first.
4. Winners will be chosen randomly and will be informed via email.
5. Entries that come directly from other websites will not be accepted.
Posted by JD at 13:18

Email ThisBlogThis!Share to TwitterShare to FacebookShare to Pinterest
Labels: Plebs